If I did, gliding wouldn’t be on it. Cruising on the Mediterranean. Yes. Sunning on a beach in Maui. Yes. Gliding. No.

So why was I being strapped into that tiny, flimsy plane with no engine or propeller?

It’s all because of my friend, Phyllis McIntyre. She began organizing flights for her amputee support group three years ago, and now she’s hooked on flying three thousand or more feet above ground, supported by nothing but air currents.

I’m not a risk taker. I’m a writer. Sitting at my computer, I can handle whatever risk the limits of my imagination can come up with. But I’d heard Phyllis talk glowingly of gliding several times, and (darn my writer’s curiosity!) before I even thought about it, I said I wanted to try it.

That was how I ended up driving an hour and a half north of Toronto with Phyllis and her husband, Nate Redmon. The skyscrapers behind us had disappeared, and we drove down a highway that divided miles and miles of farmland. The farmland and clouds, Nate explained, are necessary for gliding. Heat rises from freshly plowed fields and lift the glider. I can’t remember what he said about the clouds because I was busy calculating when I should take a Gravol pill. My best travelling companion is an anti-nausea pill. I don’t leave home without it. 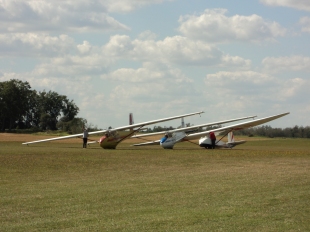 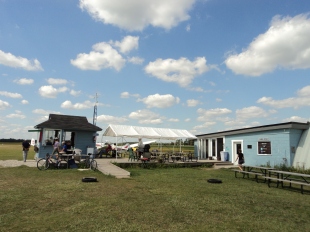 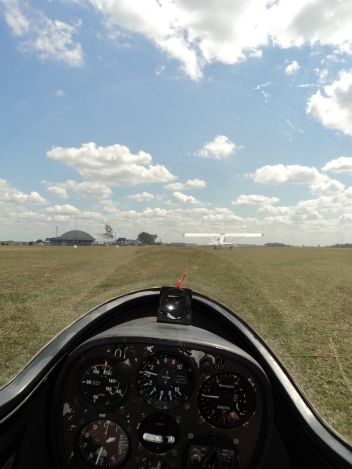 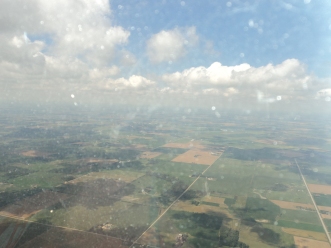 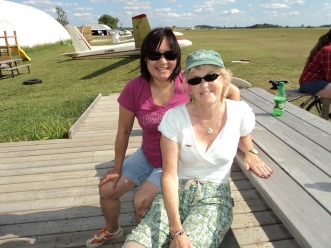 The York Soaring Association is just outside the town of Arthur in Ontario. It created the Freedom’s Wings program so that the disabled could experience gliding in gliders fitted with hand controls. Phyllis, a double amputee, thought it would be a great summer activity for the support group she co-founded with fellow amputees Kitty Lo, Malcolm Koss, and Roger Hunter who she met while receiving outpatient physiotherapy at St. John’s Rehab Hospital in Toronto. They all felt that they needed a support group for both amputees and their caregivers to discuss issues and to support each other as they worked to regain a “normal life.” Together with Nate representing caregivers, they formed AMPower. Through word-of-mouth, twenty-five people showed up at the first meeting in October 2010.

“You don’t feel like you have any kind of disability,” Phyllis said, about the Freedom’s Wings program. Pinned to her t-shirt is the Freedom’s Wings pin that is given to amputees who complete their first flight. “You’re sitting in this vehicle and you have the ability to fly just like anybody else. You don’t need to be as fast. You don’t need to be perfect.”

On this day, only one other AMPower member and her family arrived to take part in York’s soaring program. Gliders, leaning on one wing, are lined up on the grassy field. The clubhouse is a small clapboard structure with a long deck outfitted with picnic tables and a barbecue. It was a perfect day to go gliding, sunny and cloudy with a temperature hovering around 30 degrees Celsius. We had a picnic lunch while we signed up and waited for our turn. From the deck, we had a clear view of the take-off. A single engine plane dragged a glider across the field and up into the air. It was the first time I’d ever seen this and was fascinated…until my name was called.

“Would you like to do a little wing dipping?” Don, the pilot asked as he helped buckle me into the seat.

With the bottle of Gravol pills and a plastic bag tucked into my purse at my feet, I was ready. The glider rumbled (or was that my stomach?) as it was dragged along the ground before lifting into the air. When we finally reached 3,000 feet, I felt a slight tug as the rope was released. We were on our own, with nothing but plowed fields, clouds and Don’s skill as a pilot to keep us aloft. On a clear day, I would have been able to see the CN Tower, but I wasn’t disappointed. The view was spectacular. What was even more amazing was the hang glider flying about 1,000 feet above us. After flying for a half hour, we headed back to the club and Don made a smooth as silk landing. 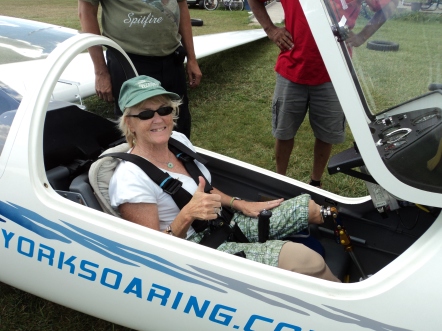 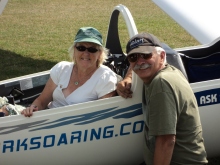 Phyllis and her pilot, Rob

This was Phyllis’s sixth flight. Nate lifted her into the cockpit and she buckled herself into the seat. After the hatch was closed, the glider was pushed into position. Her pilot, Rob, took her to the exhilarating height of 6,000 feet. She was glowing when she emerged from the cockpit.

“When I’m up in the air, I don’t even remember that I have prosthetic limbs,” she said.

Freedom’s wings keep you soaring, even on the ground.

Want to experience my take-off? Click on the video below. It’s seven and a half minutes long. 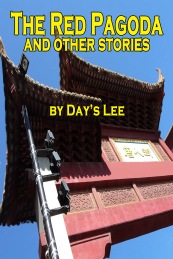