Saturday night, my family had an emergency meeting of sorts. Our favorite Chinese restaurant, Papa Jackie, is closing for renovations for two months as of May 8th. My brother sent out a text alert Thursday announcing that he had made supper reservations for Saturday night at six o’clock. We responded quickly like any dutiful family member would when there’s a promise of a good meal. So there we were, eleven of us, squeezed around a table for ten. Every table in the restaurant was reserved and most likely, so was the next seating at eight.   END_OF_DOCUMENT_TOKEN_TO_BE_REPLACED

One evening in Beijing, my tour group had supper at a family home located in a hutong. A hutong is an old residential neighborhood.  Many were bulldozed in the name of progress and replaced with skyscrapers, but apparently, the Chinese government put a stop to it in order to preserve those that remain. This was an opportunity to see a private home, and get away from the bland meals served by the restaurants that catered to tour groups, even if it was only for one evening.

To get there, we took an old mode of transportation: a rickshaw. There was at least a dozen of them lined up along a wide street waiting for passengers and we would need all of them for our group. The drivers happily helped us climb in and when everyone was seated and photos taken, the rickshaws rolled out one after the other, like a wagon train rumbling across a frontier.  END_OF_DOCUMENT_TOKEN_TO_BE_REPLACED

Every day on my way to work, I pass by a Hong Kong style pastry shop called Patisserie Cocobun in Atwater metro. It sells a wide variety of freshly baked Chinese buns which include buns filled with either coconut, mango, red bean, custard or if you prefer, no filling at all. I love the bread which is either soft and sweet or lightly crusted. Either way, they’re delicious!  I bought one out of curiosity and now I’m hooked.

The hot buns are filled with either BBQ pork, curry beef, hot dogs or other combinations with ham and are the size of a sandwich. Since  the buns cost less than $2 each, it costs me an average of $4 for lunch.  Cocobun also sells bubble tea and other Hong Kong style cakes and cookies. 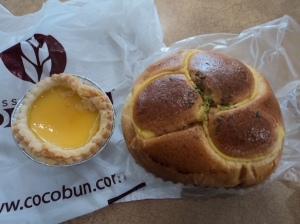 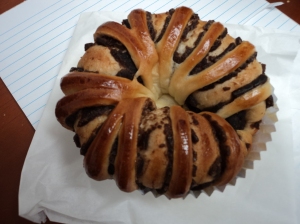 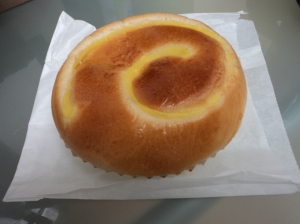 When I was a kid, my parents owned a Chinese-Canadian restaurant called Lee’s Garden. It was located on Park Avenue near Laurier Avenue in Montreal. I started working there on weekends when I was in elementary school, helping my mother make egg rolls or bagging take-out orders. By the time I was in high school, it became a full-time summer job. I answered the phone and handled the cash register. The restaurant was like a second home. The waiters and cooks became extended family and regular customers became old friends.

Then one day my parents told me something that shocked me to the core.  Nothing on the menu was real Chinese food, they said. The butterfly shrimps, chicken chow mein, pineapple chicken, and everything else was invented for the ghosts, the red-haired devils. The news hit me like a lightning bolt. How could that be? Chicken Soo Guy, won ton soup and egg rolls were my comfort food! They were fake?! If the food was fake, then what did I know about being Chinese?

The restaurant’s most popular dish and one of my favourites (and still is) was Dry Garlic Spare Ribs. The tender, melt off the bone ribs with the sweet, sticky sauce was on almost every order. The recipe is one of the few things I have left of the restaurant and I’ve decided to share it with those who made the restaurant a welcoming place, a place where Sunday dinners became a part of their family traditions, where special occasions were celebrated and where the regulars dropped by for a cup of coffee, a piece of pie and friendly banter. You. The public.

Lee’s Garden closed in the early 1970s, but it remains forever in my heart. If you or anyone you know frequented the restaurant, please write a comment. I’d love to hear your story. 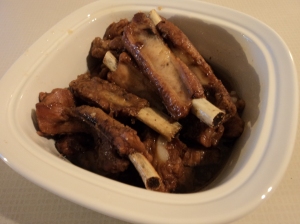