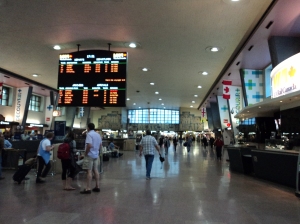 The St-Jean Baptiste long weekend is coming up and many people will be planning a short getaway to enjoy the three-day-weekend. With the spirit of travel in mind, I’m posting an article I wrote about a train ride I took to Toronto that was first published in Canadian Living magazine, November 1997.

As I waited to board the train from Montreal to Toronto, a Chinese man approached me and, speaking in broken English, asked if I were going to Union Station. Wary of strangers who ask about my travel plans, I hesitantly nodded yes. “Could you look after her?” he asked, gesturing toward a petite, well-dressed woman of about fifty. “She doesn’t speak any English.” Smiling shyly, she bowed.

“I don’t speak much Chinese,” I warned, realizing he’d chosen me because I was the only Oriental in line.

“It’s OK. Thank you,” he said, and left after a quick goodbye to the woman. We boarded the train and sat together. She slept. I read until the steward appeared pushing the lunch cart.

I’m bilingual: I speak both French and English, but my Chinese is very limited. Stumbling over my mother tongue, I asked if she wanted something to drink.

I understood her Cantonese reply, “Apple juice.” So far, so good. Then came the menus.

“Do they have rice?” she asked as I scanned the list.

“No rice,” was all I could manage. I ordered apple juice.

She pointed to a drawing of a pizza. “Bread?”

“Ye-e-ss.” What was the translation for tomato sauce? “It has tomatoes.” Picking up a pizza slice from the cart, I showed it to her. The thick sauce did not resemble tomatoes in the least. She frowned. I showed her the menu, hoping she would recognize something. Surely, “Chicken Sandwich” was universal. She pointed to another drawing. “Is that bread?”

“Un, no. It’s sweet. A ma-a-fin.” I regretted it the instant I said it. Saying muffin with a Chinese accent is as ludicrous as assuming a foreigner will understand English if it’s spoken slowly and loudly enough. The steward looked amused as he handed me a muffin for her inspection. “How about Pita Pockets?” he suggested.

“Oh, I couldn’t explain that in Chinese,” I groaned. Finally, she decided on pizza, insisting we share the large slice. Quiet settled between us as we ate. She cut the pizza into pieces and hesitantly tasted each one. After we finished, she pulled out a small bag containing toothpicks and offered me one. I accepted.

We attempted more conversation. I strained to understand as she talked about her visit to Canada. She giggled as I formed awkward phrases. We carried on this way and somehow it didn’t matter that I had forgotten so much Chinese. In the end, we understood each other perfectly.