There’s one thing that David Chang, the main character in my book, Guitar Hero, and I have in common: it’s a love of Beatles music. I twisted and shouted to their songs as I grew up. My Chinese immigrant parents shook their heads in wonder when my brother, sister and I spent our allowance buying Beatles albums at the local Woolworth store. With my friends, Kim (blogger Tranquil Dreams; read her post about the exhibit here) and Jennifer, I got a chance to relive those times at the exhibit The Beatles in Montreal at Pointe-à-Callière museum. 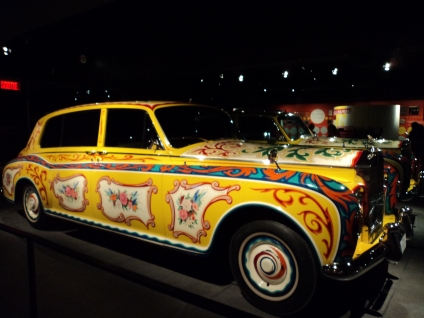 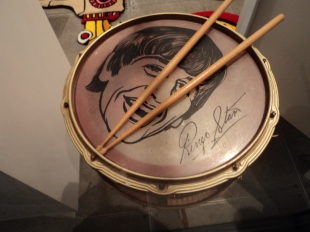 Guitars used by The Beatles

Starting from the beginning as The Quarrymen, the exhibit tells their story through photos, memorabilia, posters, newspaper clippings and video clips which of course include their debut on The Ed Sullivan Show. The museum also recreated the famous rooftop session at Apple Studio in London. By hanging the screen from the ceiling, it feels as if you’re on the street with the crowd that day on January 30, 1969. You also have the chance to be the 5th Beatle, that is, if you have the courage to sing karaoke in a museum so quiet you can hear a pin drop. (We faked it.) Equally fascinating is the video on how the museum installed John Lennon’s Rolls-Royce.

History of The Beatles albums 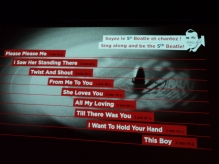 Singalong with The Beatles

The details surrounding their performance at the Montreal Forum on September 8, 1964 are the stuff of entertainment talk shows, like how the fab four rested inside the Forum while a fake limousine with four police officers wearing wigs distracted two thousand screaming fans outside.